You are here: Home / Archives for PGadmin

Below is the current Koforidua University Fees for Students. This list includes the fees schedule to be paid by all students enrolled in its academic programmes and the policies and procedures the student must follow during payment. 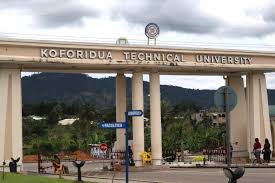 In this article, you will find the current list of Koforidua Technical University Courses and the admission requirements you must meet before you can be admitted to study your preferred course at the university.

Koforidua Technical University was founded in 1997 as one of the ten Technical Universities established in every region in Ghana. The university offers several academic and professional courses to the students of Ghana and to international students.

Presently, the University has five faculties and one institute through which it offers its diploma, higher national diploma (HND), bachelor of technology, and access programmes. Its faculties and institutes are listed below

Generally, you will require a Higher National Diploma from a course relevant to the field of study from any recognized University with a minimum of 2nd class lower division.

Note: The aggregate of the six subjects must not exceed 39 for WASSCE and 24 for SSSCE

How To Apply To Koforidua Technical University

At first glance, the Kia Picanto looks more like a huge mobile toy rather than a powerful automobile with a 1.25 83bhp petrol engine that gets the car up to 70 mph without much effort. Actually, the Picanto has three petrol engines to choose from and many other impressive features.

The car is one of the best options for those buying a car for the first time. It also ticks all the checkboxes when it comes to fuel economy, performance, and durability.

The Kia Picanto is a city car first introduced into the market in 2003. The automobile is one of the few options in the market that is not only efficient but affordable.

These days, manufacturers prefer you spend more on a small SUV or hybrid cars making it impossible for those on a tight budget or those looking for something small to get a decent ride. That’s where the Kia Picanto comes in. This cheap option might not rack up a good space, but it does well in other areas.

Third-generation Kia Picanto cars are the only options you can find brand new on the market. These models were introduced in 2016 and they come with many modern features. Fortunately, the latest models still remain more affordable than many other options on the market.

You can purchase a Kia Picanto directly from the manufacturer (you would have to deal with shipping and clearance costs) or directly from any of their distributors in Ghana.

Depending on where and whom you’re buying from, you should be able to get the brand new version of the latest models of Kia Picanto between GH¢74,000 – GH¢100,000.

Foreign used vehicles are cheaper options and most suitable for individuals on a tight budget, yet looking for something efficient and durable.

Below is a list of the price of foreign used Kia Picanto cars in Ghana.

Below is a list of the price of locally used Kia Picanto cars in Ghana.

On average, the Picanto can get you from 0 – 60 miles in an hour but you could get up to 70mph depending on the engine type you go for. As said earlier, the Kia Picanto offers three petrol engine options, starting with the 1.0 66bhp.

Its 1.0 66bhp is the entry-level engine and it lacks some key features like a turbocharger. In addition, you would have to put in more effort to keep the engine running or to go through expressways and highways. This could be pretty challenging for the average user. Fortunately, the other engine options offer a more impressive performance.

The 1.25 83bhp is probably the best options for users. While it won’t match up the fastest versions of most modern cars by top brands, it still gets up 70mph without much effort.

Another impressive feature of this engine is its optional automatic gearbox (the only engine that comes with such). Furthermore, this engine revs better than the 1.0.

The last option is the 1.0 T-GDi 99bhp engine. This engine has more features (including a turbocharger) and it is more flexible than the other two. If you’re looking for something that will give you a superb driving experience, then this is pretty much the best option. However, you would have to spend a lot more to purchase a Picanto with this engine than you would with the other two.

Aside from its engine, the Picanto packs points for comfort. It is one of the good cars that don’t bounce around uncomfortably when driving on undulating roads.

The automobile doesn’t fail to impress in the area of handling as its steering is quite accurate and precise. Also, the steering wheel is made from very comfortable material so you’re less likely to stress your hands even drive long distances.

The Picanto is nowhere near silent, but it isn’t noisy either. The best experience comes from its four-cylinder 1.25-liter engine. Although is a bit too loud at really high revs, it sends less vibration through the pedals and steering wheel.

Fortunately, the noise and vibration don’t affect the performance of the engine in any way.

The Interior of the vehicle is pretty impressive for its price. It has enough side support on the driver’s seat to keep you comfortable throughout your journey. It’s well-positioned pedals and driver’s seat height adjustment offers more comfort than you would ever expect.

The dashboard layout of the vehicle is pretty much basic, but it’s well-placed buttons and easy-to-understand descriptions are a big bonus for the automobile.

While the interior is quite small, it is big enough for five people to fit in comfortably. It also has a pretty large boot space which takes up more luggage than most other city cars in its class.

The iPhone 11 is the latest iPhone in the market, but this model is quite different from the others. First, it cost way less than other models and secondly, it has many impressive features that should get every user hooked.

This iPhone 11 review will provide you with all the things you need to know before spending on the device.

Apple still retains the design of its X models for the iPhone 11. The smartphone features a front and back glass panel, but unlike its previous models, the glass is much tougher and will survive last through more drops.

For the iPhone 11 model, Apple makes use of custom Corning glass. This glass is one of the toughest of its kind, even tougher than the Gorilla Glass 6 used in other flagship phones like the Galaxy Note 10 Plus. The Gorilla Glass 6 is expected to survive 15 drops from a height of 1 meter and if the Corning glass is as tough as they say it, then you should expect it survive more drops and from greater heights.

The notch houses the selfie camera, speakerphone, and the sensors.  At the base of the phone, you will find the USB 2.0 protocol lightning port, a microphone port, and a speakerphone grille. Like most recent iPhone models, there is no 3.5mm headphone jack on the base of the iPhone 11.

On the sides of the device, there is really nothing new, it comes with the regular power button and volume control buttons.

At the back is where much of the changes happen. The iPhone 11 features a new camera housing unit, with two large lenses in it. In between the lenses is a dedicated LED flash for better low-light image capturing.

The iPhone 11 features one of the best cameras in the smartphone industry. Major improvements in the camera include a 12-megapixel front camera sensor, 4K60 video capability, smart HDR system, and a 120-degree ultra-wide-angle lens,

Also, there is a significant improvement in the night mode function of the camera. The night mode automatically kicks in when it detects poor lighting conditions.

For hardware, there is not really much to go by. It still features the 64GB, 128GB, and 256GB storage options, but there is an improvement in the RAM. In the iPhone 11, you get a 4GB RAM which boosts the performance of the device and allows you to run memory-demanding apps and do other things at the same time.

The iPads are a series of Apple tablets and one of the best in the market today. Their tablets are specifically made for individuals who are more interested in quality and durability and ready to spend on a high-end product.

What is a Tablet?

If you don’t know, a tablet is more like a portable personal computer that you can move around. These devices are more affordable than a laptop and offer the best user experience when it comes to reading, giving presentations and web browsing. They are also smaller and lighter than most laptops making it easy to move them about.

Prices of Apple iPads in Ghana

In this post, we are going to review all Apple iPads and reveal the prices of iPads in Ghana.

The Apple iPad 10.2 is the latest tablet and it features Apple top processor – Apple A10 Fusion (16 nm). This tablet is quite smaller than the Apple iPad Pro and we believe that explains the cheaper price.

The Apple iPad Mini is for customers looking for something they can easily fit in their bag and move about. The 7.9-inch tablet comes packed with many beneficial features and a nice price tag.

The Apple iPad Pro is the largest iPad in Apple’s arsenal. The device comes with a lot of features, but that also means it has one of the highest prices among other iPads.

The Apple iPad Air is one of the first iPads ever made and although most of its features are outdated, it still makes for a great device especially for shoppers on a tight budget.