Home
Farming
Cashew Production in Ghana: A Guide for Beginners

The cashew nut is officially recognized as Anacardium occidentale in scientific circles. The crop is believed to have originated in the northern section of South America. The cashew nut was brought to Mozambique by the Portuguese, where it prospered, establishing huge forests that subsequently spread to the West African area. This crop has been growing throughout Africa for more than 500 years, either naturally or via the efforts of smallholder farmers.

One of the most significant obstacles to the availability of cashew nuts in Africa is a scarcity of processing capacity. Most African countries presently sell their crops to India, Vietnam, and Cambodia, with the exception of South Africa. Another group of emergent developing countries, such as Ghana and Burkina Faso, has begun processing their own cashew nuts and marketing them to a diverse variety of customers, including the French. These manufacturers may also sell their products in international markets, such as Japan, China, and the United Arab Emirates, where they can earn better prices.

The cashew nut tree is a fast-growing tree that may reach a height of 10–12 m in a matter of years. The trunk of this species is frequently oddly formed.

The blooms are formed in a panicle or corymb that may grow up to 26 cm in length. Each flower is tiny, pale green at first, then becomes crimson, and has five thin, sharp petals that range in length from 7 to 15mm.

The cashew nut (seed) hangs from the bottom of the apple and is either c-shaped or kidney-shaped in appearance. Economically, the tree has a 45-year life expectancy.

The cashew nut thrives in a tropical region with high and consistent temperatures and humidity. It is quite susceptible to frost.

Between 25°N and 25°S latitudes, cashew nut trees can grow in a wide range of environments.

The cashew nut demands heated temperatures ranging between 25 oC and 29 oC, although it may survive in temperatures as high as 41 oC if properly cared for. The ideal monthly temperature for cashew nut production is 28 degrees Celsius.

The cashew nut prefers deep (> 2 m) well-drained soil with a light texture and good drainage. It is not recommended to grow cashew nuts in heavy clay (particularly black cracking clay), compacted and hard surface soils, hardpans, or soils with concretions inside the rooting zone. Cashew nuts may be classified as a plant that prefers sandy soil. When growing this crop, the pH range is between 4.5 and 6.5, with 3.8 being the minimum acceptable value. In addition to being intolerant of salinity, cashew nuts do not thrive in lowlands, flood plains, or swampy places with inadequate drainage.

The optimal time to plant will be determined by the amount of accessible soil moisture. The optimal period to plant in the coastal lowlands is between April and June.

The following procedures should be followed in order to build a cashew nut orchard:

Controlling the growth of a young orchard

Pruning in the early stages

Formative pruning is the training that is performed on grafted plants in order to train them to grow upright to a height of 1.0–1.5 m. This task should be done during the first five years of the cashew nut tree’s growth. It is important for the tree to keep growing.

As soon as possible after planting, you should make fire breaks around the field. This will help prevent fires in the field.

Young cashew nut seedlings are particularly vulnerable to disease and insect damage. It is critical that the seedlings be scouted on a regular basis and that preventative measures are taken.

Getting Rid of Suckers

Suckers are new shoots that emerge from the rootstock of a plant. As a result, they compete with scions for food resources, and as a result, they should be eliminated. Lateral branches on the scions inhibit the development of the scion material in an upright position. When removing horizontal shoots or branches, take care not to remove any leaves from the main stem of the plant. Desuckering should be done on a constant basis in the first year until the tree reaches 1 m in height.

Preparation of Cashew Nuts for Harvest and Postharvest Handling

Three to four years after transplanting the seedlings, cashew nuts begin to bear. Harvesting the nuts as soon as possible, especially in damp weather, and drying them before storing them are recommended.

Cashew nuts do not develop at the same time as cashew fruit. The harvest season lasts 40 –70 days, and the nuts should be gathered on a daily basis during this time period. The harvesting season runs from November to May, with the peak harvesting time being between November and January. To obtain high-quality nuts, clean the space beneath the tree, remove any fallen fruits, separate the nuts from the fruit, and dry the nuts in the sun. 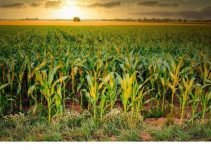 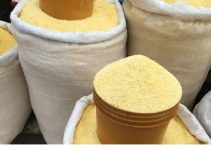 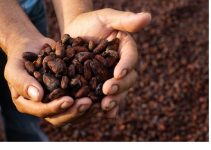