You are here: Home / Professions / How to Become a Football Referee in Ghana (2020)

In this guide, we have explained all the steps you’ll need to take if you want to become a referee in Ghana.

To become a referee, you will need to have a certain skill set and possess certain qualifications as required by the Ghanaian football association.

To become successful as a referee in Ghana, you’ll have to be exceptional.  Referees with the most experience and the best track records get to officiate top league matches in Ghana. Also, they get called up by international football associations like FIFA and CAF to officiate matches. 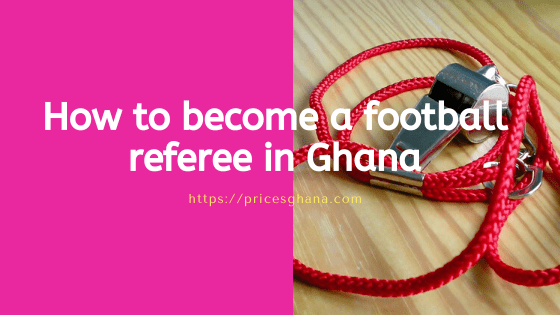 Who is a Referee?

Football referees are sports officials that preside over football games and implement the rules of the game. Referees detect violations, monitor player safety, offer penalties and free kicks and track the time of the game.

In the field, these officials have to make their decisions under pressure and a wrong decision could result in a lot of criticism and a dent on the career of the referee.

How to Become a Football Referee in Ghana

Below, are the steps every individual must take if they hope to become professional referees and officiate football games.

Training programs for referees are offered through the Ghana Football Association or through approved colleges and institutions. These programs prepare the students for the field and teach them how to interpret the rules of football.

When you join these organizations, you will pick a referee course. Some organizations offer a single while others offer different courses. Below are modules you should expect to find in a Basic Referee course in any training institution.

This course will cover the following key aspects

There are other courses for individuals who want to officiate other football tournaments such as football games involving children. Courses like this generally include the following

After training and getting your certificate as a referee, you’ll have to prove your worth if you hope to get promoted to the top levels and to officiate matches in the top league.

There are seven levels and as a newbie, you are probably at Level Seven. At Level Seven, you don’t get to officiate many games. You’re still in your early years and the next step should be to get more training.

Depending on your performance both on the field and in academics (tests that you’ll have to pass to move on to the next stage), you’ll be promoted to Level Six.

To get promoted, you’ll have to stay at Level Seven for a period of time (probably a year) and you will have to meet a satisfactory average mark after presiding over a set number of games.

Moving on to Level Five is just about the same, however, the rules are stricter as you will be getting closer to officiating top games. During this time, it is paramount that you put your best into the profession.

At Level Four, you get to be a referee in the senior amateur league. These referees are not yet able to officiate matches in the national league, however, they can act as assistant referees to the main referees officiating the matches at the national level.

Level Three is quite similar to Level Four, however, at this level, you’ll be given more chances and as you edge closer to becoming a national league referee.

Referees at Level Two handle the lower divisions or League B. These referees have to gain a certain level of experience before they can move on to the next stage

Level One referees are the top referees who have their names on the National List of Referees. These sport officials preside over tournaments like the Ghana Premier League and they are usually the preferred options for international tournaments like AFCON and the World Cup.

At Level One, a referee can expect the best pay, allowances, and bonuses for officiating matches. The more experienced the referee becomes, the more pay they get.

The Salary of A Referee in Ghana

In Ghana, referees are paid per game. The amount the referee receives usually depends on the type of game; whether it is a local game, league game or international game. Referees who officiate games in the league could receive as much as GHC 800 while those who officiate international games (Word Cup and AFCON games) usually receive higher wages.

In some tournaments, the referees are also paid allowances including their salaries. The more experienced a referee is, the higher the pay and the more matches the referee gets to officiate.

Those are the steps to becoming a referee in Ghana. Getting to the top-level takes a lot of determination, experience, and several years of hard work. So if you hope to become a World Cup official someday, you should be prepared to work extremely hard to get to the top.

Read more on Professionals in Ghana