From childhood, we have all been taught about the Ghanaian coat of arms but the truth is that as we advance in age we tend to lose most of this information. Not because we want to, but because we have become encumbered with other stuff like meeting daily needs and growing a career. But then comes a need to know about the Ghana Coat of Arms.

It promises to be an interesting read so join me on this expository historical journey.

Before we go ahead with discussing the Ghana Coat of Arms, it is imperative that we discuss the phrase “coat of arms” as an entity on its own. We have heard this term from childhood but how many of us can truly define the phrase “coat of arms?” Before I define, take a minute to try defining it without looking it up. What did you come up with? Let me help you out then.

In simple terms, a coat of arms is used by a family, organization, town, or country as a means of identity. The coat of arms is usually crested on a shield which them becomes the symbol of the community. We can trace the use of the coat of arms back to the British and French ruling houses. Synonyms of the phrase include insignia, crest, escutcheon, and heraldry.

The ancient Greek and Roman military units are regarded as the earliest users of the coat of arms before the twelfth century when most noble houses in the western world began using it. Initially, it was called heraldry and only a few countries had permission to use it. The origin of the phrase “coat of arms” comes from the fact that the heraldry was later designed on surcoats worn by combatants who participated in knightly tournaments.

Today, every sovereign country is allowed to use its own coat of arms. Other institutions and private organizations have the liberty of using their own coat of arms. Having known this let’s get to the crux of this article.

History of the Ghana Coat of Arms

Ghana used to be referred to by the name “Gold Coast” when it was still a British colony. At this time, the country used a coat of arms designed by the British. This coat of arms was quite similar to the one used by Sierra Leone and Gambia that were also British colonies at the time. It was a badge which showed an elephant with its trunk in the air. The elephant was in front of a palm tree and grass-covered undulating plains. The badge had the initials G.C. inscribed at the bottom.

Just like every coat of arms, the Ghana coat of arms has several parts and each part has a symbolic meaning. In this section of this article, we will discuss each of these parts along with their symbolic meanings. It should be a fun read so let’s go ahead.

The Ghanaian coat of arms is made up of a shield which is divided into four quarters by a St. George’s cross. The cross is rimmed in gold and each quarter of the shield has a specific symbol embedded. The symbolism of each is explained in the next few paragraphs:

That’s about it for the Ghana Coat of Arms. I hope this article has been helpful and enlightening for you? Thank you for reading. 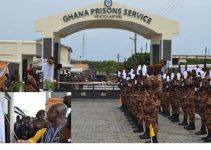