You are here: Home / Directory / List of Ethnic Groups in Ghana & Details

Ghana is one of the most populous countries in West Africa and notably the first sub-Saharan African country to gain independence.  As of 2017, there were about 28.83 million people living in the country. 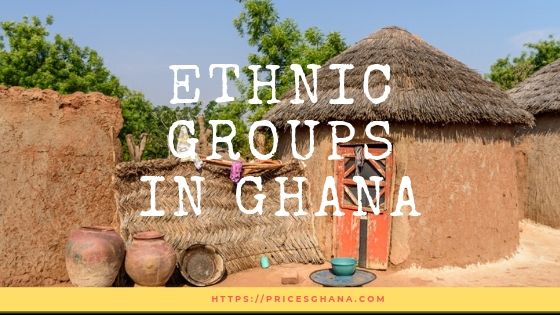 Below is the list of ethnic groups in Ghana and their details.

The Ashanti Empire was founded in 1670 by the gold-rich Ashanti people. They are famous for their trademark kente cloth, craftsmanship and skillful artwork.

Some of the famous artworks, masks, furniture and sculpture used in Ghana and displayed in Museums were done by the Ashanti people.

The Mole-Dagbon people are the second largest ethnic group in Ghana. They account for 16% of the entire Ghanaian population.

This ethnic group is divided into other sub-ethnic groups namely: Mossi, Mamprusi and Dagmoba

The Dagomba people make up a large part of the Mole-Dagbon tribe. They practice an oral tradition in which their culture is passed down through music and words of the mouth.

A majority of the Dagomba people are Muslims. Their culture is heavily influenced by Islam which was introduced into ethnic group by Soninke traders between the 12th and 15th centuries.

The Mossi people are historically related to the Dagomba people. They speak the Moore language. They are also known to be skilled crafters. The Mossi people have several traditional and cultural holidays and events which they celebrate every year.

The Ewe people are an ethnic group found in some parts of Africa. The group can be referred to as the third largest ethnic group in Ghana as it has over 3 million people in the country alone. They can also be found in other African countries like Togo where they number to over 2 million.

The Ga-Adangbe people are a major ethnic group in Ghana. Although there are no official figures as to their current population, it is estimated that over 2 million people from this ethnic group reside in the country.

This makes them the fourth largest ethnic group in the country. A majority of them reside in the southeastern coastal region of the Greater Accra region in Accra.

Like other ethnic groups in Ghana, they celebrate several festivals including the popular Asafotu festival. They are also known for their elaborate funeral celebrations and craftsmanship.

The Fante or Mfantsefo are an Akan people. The ethnic group can be found in the southwestern coastal regions of Ghana.

The group is notably the first to have relations with Europeans during the colonial era. Due to their contact with the Europeans, their culture became heavily influenced by British culture and language.

The Guan people are believed to have migrated from the Northern part of the world before arriving in Ghana in the 11th century. This makes them one of the first settlers in Ghana.

There are many sub-groups and deities of the Guan people. One of such Guan groups – the Effutu people celebrates the famous festival, Aboakyer, every year. The festival is celebrated to honor one of the Guan gods, Penkye – Otu.

The Hausa people came to Ghana mainly through trade, however, the Hausa language has spread to all parts of the country through other means.

The Kusasi people are a smaller ethnic group in Ghana. They live in northern Ghana and speak the Kusasi language.

The Kusasi people celebrate the Samanpiid Festival every year. The festival which involves dancing and music celebrates a bountiful harvest after the farming season. The festival has been celebrated since 1987.

The Konkomba people can be found in many parts of Ghana. They represent 3.5% of the Ghanaian population. Their native language is Likpakpaln. Just like other Ghanaian ethnic groups, they are also known for their festivals.