You are here: Home / Professions / Soldiers’ Training in Ghana: What Does It Entail? (2020)

Serving in the Ghana Armed Forces requires resilience, wit, smartness, and determination as it is one of the toughest and most respected jobs in the country.

To prepare them for the journey ahead, they are subjected to different types of training including endurance training and intelligence training which test their physical and mental abilities. 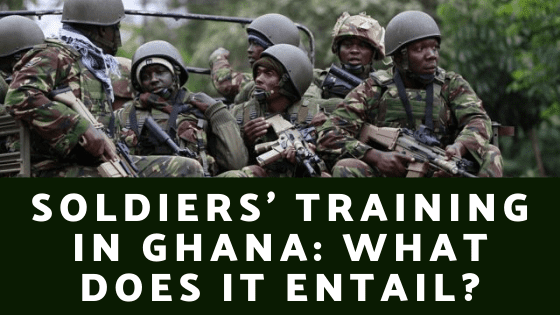 In this article, we are going to take you through the vigorous training process a soldier must pass through before being recruited into the Ghana Armed Forces.

The training of soldiers in Ghana is overseen by the Ghana Military Academy. The military academy is based in Teshie in the Greater Accra Region and is responsible for the planning and offering of basic military training to officer cadets of the Ghana Army, Ghana Air Force, and the Ghana Navy.

It was established in 1960 and his since provided training services including short courses in higher military education for recruits of the three parts of the Ghana Armed Forces.

Recruits are chosen based on a recruitment exercise that involves a written examination. Only eligible candidates that meet the entry requirements and score the required marks will be admitted into the academy.

For soldiers interested in the Ghana Army, they will go through a 2-year training course. The first six months of the course involves rigorous training to prep the soldier and build his military might. After the completion of the first six months, top candidates in the academy will be selected to finish their studies at foreign institutions.

Soldiers’ Training in Ghana: What Does It Entail?

To get recruited into the Ghana Armed forces, cadets will have to go through a rigorous training process for two years. The training educates and provides them with the necessary skills required to perform the military jobs they signed up for.

The training is usually intensive and sometimes, some recruits wouldn’t be able to make it through the first six months at the academy.

Training in the Ghana Military Academy

During the first month, recruits will be introduced and taught the basics of soldiering. These lessons are meant to transform the recruit from a civilian to a confident soldier of the Ghana Armed forces.

The recruits will also be taught the core value of the Ghana Armed Forces and introduced to the rules and regulations binding the Army. Usually, these rules are strict and failure to comply with the rules will mean instant disqualification from the camp.

Recruits will have to familiarize themselves with the various ranks and how to address their fellow recruits and senior officers. They will also learn secret military languages that will help for speedy communication without exposing any vital information to outsiders.

After some weeks at the academy, the recruit should have adapted to life as a soldier and can now take on more rigorous training. For the next few weeks, the recruit will be subjected to very challenging tasks, taught necessary fighting skills (more emphasis will be placed on hand-to-hand combat, how to engage targets with a gun, and how to fight with a weapon), and how to work in a team.

At the stage, the fitness training of the recruit has become more challenging and very few make it to the next month.

If you’re able to advance through the training and discipline, you should be able to get into the Ghana Armed Forces. At this stage, you’re already close to the end of the 2-year training course.

At the end of the training course, you will be taught how to build your individual tactical training, improve on your teamwork, get acquainted with the use of weapons (including a gun), and advance your gun marksmanship.

You will also be subjected to drill tests that simulate real-life combat. During these drills, your performance will be noted and how well you perform will determine if you will be recruited into the Ghana Armed Forces after graduation.

Recruitment Into the Ghana Armed Forces

After the rigorous training at the military academy, the recruits would have successfully gained the necessary tools needed to serve in the military. Thereafter, cadets who successfully completed their training would be drafted into the Ghana Armed Forces.

After being drafted, training usually continues. The soldier will be sent on missions, go on drills and be sponsored by the Ghanaian military to study in foreign military institutions.

Other Things to Know About Soldier Training In Ghana

This is due to some unrealistic expectations of some recruits who see the military as a form of employment rather than service to the country.

The training process is quite tough and only those who are able to meet up with the challenges make it through. Even after making it through the military academy, you will have to follow strict rules and live a life befitting of a soldier in the Ghana Armed Forces.

If you are not physically fit or able to go through tough situations without breaking, then the military is not for you. Also, if you’re unable to obey the rules and pay your full respect to your superiors and the authority, then you need to reconsider joining the military.

Read more on Professionals in Ghana